What You Can See in a Puppet 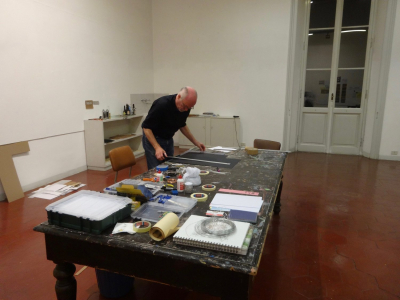 What can a puppet do that a human can’t?

That’s the question puppeteer Dan Hurlin asks every time he writes a new play, including “Bismarck,” a new work he’s developing during a two-week residency with the Department of Theater Studies.

Part of the New Works Lab, “Bismarck” is based on the true story of a young woman named Takako Konishi, who was found wandering the icy streets of Bismarck, North Dakota wearing a miniskirt, a cropped jacket and no hat or gloves in the winter of 2001.

Clearly, she was not dressed for the dead of a North Dakota winter. Two police officers brought her to the stationhouse to warm her up with a cup of tea, and to find out if she needed help. She spoke only Japanese; they spoke only English. (They called the local China Dragon restaurant for a translator, but unsurprisingly no one there spoke Japanese either.) Through non-verbal communication, the police officers deduced that she was on her way to Fargo.

But when she drew a picture of where she was headed (a drawing of a road with a tree by it) one of the officers suddenly realized that she had come to North Dakota to find buried treasure. The Coen Brothers’ 1996 dark comedy “Fargo,” begins with a crawl that identifies it as being based on a true story (which in fact, it is not) and in it, the character played by Steve Buscemi buries loot by the side of the road, but suffers an unfortunate rendezvous with a wood chipper before he can reclaim it. This was the treasure the young woman was hunting for.

Hurlin presented an in-progress version of “Bismarck” in Sheafer Lab Theater on September 16. We spoke to Hurlin about his hopes for the play, why puppets can help tell this story and how a Duke residency is helping his process. This interview has been lightly edited for length and clarity.

What should audiences expect from "Bismark"?

I don't really know. I mean, it's a work in progress. A lot of the props and a lot of the objects that we’re messing around with are stand-ins at this point. Music is still being written. We're still deciding on a kind of overall feeling for the projections, the choreography.

I think what we are going to do at least some of it in some kind of in order. In other words, we’ll do scenes one through three, but there might be one, possibly two things out of order. This is just this latest version of “Bismarck,” and it's different than the last version of it.

How far are you into the development of this project?

We had a quick run of it at the O'Neill Center in Connecticut a number of years ago. But that for me was just a kind of feasibility study to see if there was a there there. Then we had a two-week residency at Sarah Lawrence College two years ago, and now we've got this two-week residency.

At the end of this residency, we will have had a total of four weeks of rehearsal. Usually it takes a great deal longer. I have a tendency to work in short bursts with big chunks of time in between to rewrite and to rethink and to process and all of that.

So the development of the piece is slow, but that actually suits me just fine.

What ideas are you exploring with this story?

Well, they change from time to time.

The initial impulse was when Trump was in the White House. I was thinking a lot about his immigration policies and, you know, how I didn't like them. And I began thinking about how America is sort of geographically isolated from the rest of the world, except for Canada and Mexico and South America a little bit.

I don't tend to hammer it home much because I don't like that kind of art, but I think a lot of it is about the way we, as Americans, read otherness.

And why use puppets in that kind of story?

It's supported by the way that human beings tend to read puppetry. The puppet has some actions. It does its choreography. But it's the audience that fills in all of the emotional detail and all of the thinking of the puppet. And I think, in some ways, we do the same kind of projection on bodies that are other.

Puppetry is a very analog art form. It's an ancient art form, particularly the kind of puppetry that I use in this piece and I’ve been exploring for the past number of years, which Bunraku-style puppetry.

You know, we don't really have much of a tradition of puppetry in the United States. We have The Muppets and we have “Howdy Doody,” if you're old like me, but usually our puppetry is for children and it's very often tied to the media. Throughout the rest of the world, there's a very rich history of puppetry for adult audiences.

Whenever you make a project and you make it a puppet project, you have to ask yourself, “Well, why is this a puppet? What does puppetry bring to this story that human beings can’t?” The reasons can range from anything from, “Because I want it to be tiny” to “The puppet has to fly.”

Those are very good reasons, but what I'm really particularly interested in is the way in which puppets are ciphers, the way that they are blank slates, and the way in which the audience is instantly engaged in providing that puppet with an emotional life. I always gravitate towards stories in which the main character is, very similarly, a cipher.

It's a very elevated art form. In fact, Chikamatsu Monzaemon wrote exclusively for the puppet stage, and he's considered to be the Shakespeare of Japan, so that just gives you an idea about how elevated the art form is in that culture.

Bunraku is a particular theater in Osaka, so we don't call it “Bunraku puppetry” that we're doing — it is “Bunraku-style.” That's an important distinction.

How are you engaging the Duke community during your residency?

There are three singers that we have conscripted from the Music department to participate with this. One of them is a singer and the pianist, and they're working closely with the composer. And one of the puppeteers, Faye Goodwin, is a Duke alum.

I taught three classes for the Duke community, so there's that piece of interaction. I'm done with that teaching because we try to front load all of that work in the earlier part so that in the second half, we can focus more on the show.

How do residencies like this help with your creative process?

These kinds of residencies are essential for the development of new work, and there are far too few of them available.

Without these two weeks, I would probably have to pay upwards of $20,000 and probably more. For people who are working in nonprofits, that's just an enormous percentage of the overall budget of the project. So on the one hand, it's budget relieving. And that is just massive. I can't overstate the importance of that.

And the other thing that it does is that it allows the company — performers and me (the director), the composer, the projection designer — to have relatively clear time to work on this without the distractions of day-to-day life. Having focused, concentrated time is just such a gift.