Ryan Donovan Is Making The Stage An Inclusive Space 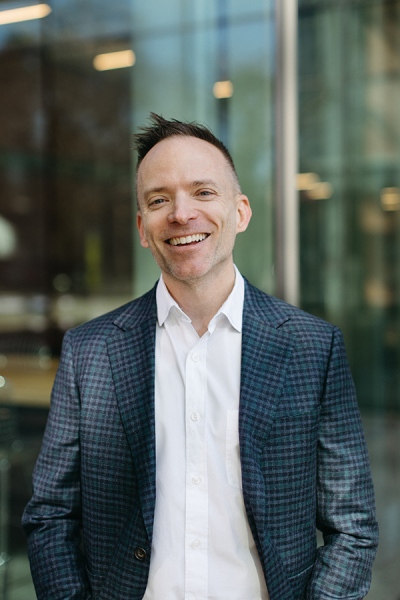 Specializing in musical theater, dance and theories of embodiment, Ryan Donovan is the author of the forthcoming book “Broadway Bodies: A Critical History of Conformity.” (L’amour Foto, Durham, NC)

Ryan Donovan, assistant professor of Theater Studies, can pinpoint the moment he decided to become a dancer.

“It all began at the National Theater in Washington, D.C., when I was seven years old and my mom took me to see the touring production of ‘Cats,’” he said. “I was sitting on the aisle, and when those dancers came into the auditorium dressed as cats, one of them came up to me and played with my clip-on tie. I was hooked.”

The wonder of that moment led directly to the decade Donovan spent as a professional dancer, but it also indirectly pointed to his future career in academia. “Both careers actually began in that moment: my performance career and my scholarship,” he said.

But wonder eventually mixed with complicated histories. “When I declared I wanted to be a dancer, I was met with the stigma of being a male dancer in this country and, in a way, that really planted the seeds for the kinds of questions I became interested in researching,” Donovan added.

“Broadway Bodies: A Critical History of Conformity,” forthcoming in early 2023 from Oxford University Press, grapples with casting politics in Broadway musicals. It grew out of Donovan’s dissertation at The Graduate Center, City University of New York, where he earned his Ph.D. in 2019. “I started thinking about who I wasn't seeing on stage in certain roles and how the Broadway industry openly discriminates based on appearance,” he said.

Donovan defines the “Broadway body” as “the hyper-fit, muscular, tall, conventionally attractive, exceptionally able triple-threat performer: one highly skilled in acting, dancing, and singing who can do their ensemble track and also cover the lead and go on at a moment's notice.”

This insistence on a single acceptable body type is concerning because, Donovan points out, casting is ultimately a labor issue. “If we're seeing something in theater, chances are it's mirroring something in U.S. society. Theater is often thought of as an inclusive space and yet it's often just as discriminatory as employers.”

The discrimination Donovan writes about in “Broadway Bodies” — based on appearance, size, sexuality and ability — can affect not only a performer’s ability to earn competitive wages, but even their access to educational opportunities.

“People who don't have conforming bodies are told often in university programs, ‘you're not going to work until you're 40’, so a lot of those young people give up before they try,” he said. “Others try to fit themselves into the mold and find themselves typecast. If you're a disabled performer, there are so few opportunities to even break in or get training.”

Donovan has already tackled these issues head-on in the classes he taught at Duke as a visiting lecturer. “Last fall when I taught Musical Theater Performance, we presented a cabaret at the end of the semester that openly engaged students with these questions of typecasting,” he said.

Playfully titled “Miscast or Typecast?,” the performance provided students the opportunity to sing songs belonging to roles they wouldn't normally be cast in. Donovan stresses that it’s important to give students permission to stretch themselves.

“I think my job here is to empower students with the sense of possibility that they can do anything and not to reinforce the body politics that we’ve all been inundated with through advertising and representation and to challenge dominant expectations of what performers should look like, or sound like, or move like.”

Donovan’s classes engage students beyond the Department of Theater Studies. Last spring, his Disability and Performance class attracted a number of participants from the Dance Program. This fall, as he leads the Duke in New York Arts, Culture, and Performance program, the 20-year resident of the Big Apple will share his love of New York and his insights into the complex social and economic aspects of the arts in New York City with a diverse group of undergraduates, many of whom are pursuing majors outside the arts.

“An advantage at Duke is that students who come here to study computer science or engineering, for instance, and don't want to lose their connection to theater, can still maintain that,” he said.

In spring 2023, Donovan will be back at Duke teaching American Musicals. “One of the exciting things about this course,” he said, “is getting students to reframe the way they look at musical theater by understanding the connections between U.S. national identity and musical theater, and how those two things map onto each other.”

It's a tailor-made situation for Donovan, whose love of teaching the performance of musical theater is matched by the impressive amount of research he produces. In addition to “Broadway Bodies,” he has two more books coming out in 2023. He is co-editor of “The Routledge Companion to Musical Theater,” which will feature 35 chapters contributed by over 50 scholars from around the world, and the author of “Queer Approaches in Musical Theater.”

“After that,” he said, “I think my next project is going to examine how dance has shaped Broadway history on and offstage, from aesthetics to marketing. This project will bring my background and research full circle.”

Donovan knows he’s found a great balance at Duke between the scholarly and performance aspects of musical theater. “It’s a thrill for me to get to do both. To bring my background as a musical theater dancer to my research and teaching is the biggest gift.”