Gone to Be Snakes Now 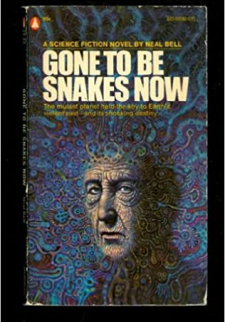 A treacherous odyssey across the nightmare terrain of the new earth. The survivors of Old Earth's holocaust had lived in the valley as long as they could remember. How they got there no one knew. They only knew it was forbidden by the Elder's to leave. For beyond the valley lay the dread Outside- unchartered deserts swarming with vipers, ruined cities inhabited by ghastly humans, and the Giant Bird, who devoured human flesh. This is the story of one who ventured Outside. What he found was the solution to an ancient riddle- and the mystery of Death itself.