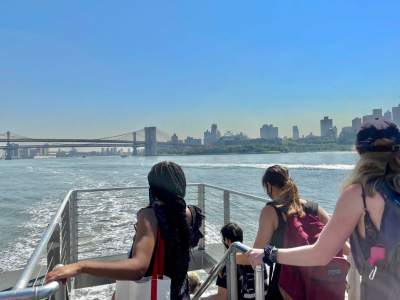 Duke in New York Students get to experience the city in full. (Courtesy of Global Education Office)

Raucous drag shows, dazzling Broadway performances, a smorgasbord of food: Duke in New York: Arts, Culture and Performance isn’t just a study away program, it’s a feast for the senses. Falling in love with the city is a familiar American story, and New York didn’t hold back on the charm for these program alumni.

“My favorite part of the city overall is how creatively rich it is with opportunities (especially in fashion) at every corner,” said Sydney Reede, a sophomore who participated last semester.

Hoping to work in fashion upon graduation, Reede was surrounded by like-minded creatives and got to work with the fashion brand Bhoomki.  “This experience definitely confirmed my desire to live in New York after graduation,” she said.

That internship component is one of the unique parts of the Duke in New York program. Students get one Duke credit for working 15 hours a week at an internship in the field of their choosing. There, they are able to immerse themselves in the area they’re passionate about, network with professionals and hone their skills in a practical way.

Ganesh Pentapalli, another fall 2021 participant, interned for a production company called Vertigo Entertainment, helping with script coverage. He eventually produced his own pilot as his final project, which helped him figure out his post-college vision.

“My internship gave me significant experience in writing about music news and entertainment journalism,” said Skyler Graham, who will graduate in 2023, “but the best part of Duke in New York was being able to gain first-hand experience in living in New York: learning the subway routes, finding new shops and restaurants and, of course, getting $0.99 pizza late at night.”

Along with the internship, students take three other courses. Two are taught by Duke faculty and focus on the arts, culture, performance and theater. The courses are hands-on and take place inside and outside the classroom.

Students also take an arts-based course at New York University, which counts for transfer credit. In the past, students have taken courses ranging from film production to Korean language for media. The program boasts flexibility that allows students to tailor the program to the experience they want to have.

Alumni of the program have gone on to work in various arts and entertainment fields, including the Tribeca Film Festival, Sony Music and Stitcher. Jobs range from reporters to actors to content designers.

Daniel Egitto, a member of the fall 2019 cohort, said joining the Duke in New York program was the best decision he ever made. Egitto worked as an editorial intern for Oxygen at 30 Rock, writing blog posts about the network's true crime TV shows.

“I mentioned to my editor that I was interested in going into journalism, and when I had to leave NYC at the end of the internship, she asked if I wanted to stay on the team as one of Oxygen.com's breaking crime news reporters,” he said.

Egitto remained on that team for the next year and a half, gaining extremely valuable real-world experience in crime reporting. He also discovered he had a passion for crime and criminal justice news.

The experience at Oxygen led Egitto to an internship at the Charlotte Observer this past summer, which in turn led to a job as a public safety reporter at the Palatka Daily News in Florida, where he currently works.

For other students like Jocelyn Chin, a current sophomore, the best parts of the program were the experiences. Students visit the Whitney, Museum of Modern Art, the Met, various Chelsea galleries, a poetry night at the Brooklyn Museum, the Met Opera and three Broadway shows.

“Many of my classmates and I would’ve never had the chance to enjoy NYC’s top-tier visual and performing arts without this program,” said Chin.