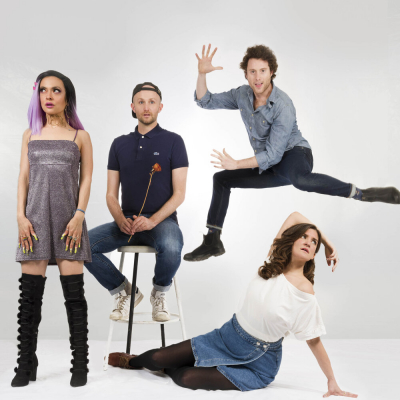 Fake Friends work together, sometimes. When they do, they usually mix and remix original text with material drawn from modern drama, pop culture, method acting, technology, and dance, pastiching from performance forms like reality TV and capital-R Realism. Through thick and thin, Fake Friends push personal, political, and theatrical boundaries, negotiating the screens and prosceniums that dominate our daily lives.

Before the pandemic, they worked with screens on stage. Their work has been presented by Ars Nova, NYTW Next Door, the Prelude Festival, Exponential Festival, Little Theater, and more.

Their next digital work was "This American Wife," which live-streamed from a mansion in Great Neck, New York. Juan A. Ramírez for the New York Times profiled the show as “a semi-improvised, high-concept dialectic on identity and ‘realness.’” Charles McNulty called it “an ingenious hybrid of stage and screen” in the LA Times.