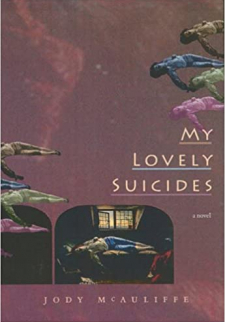 Jody McAuliffe's poetic and darkly funny first novel achieves a vivid realization of the age of Romanticism, when suicide was an option of beauty. Heinrich von Kleist, an electrifyingly modern writer, desperate for recognition from the artistic power broker of the time, his moralistic rival Goethe, is driven finally to a notorious act of violence: murder suicide. The seven chapter titles bear the names of his potential suicide partners: if you love him, you must die with him. The story moves between Kleist and his sister Ulrike, between an eighteenth century madness and an eighteenth century reasonableness, between extreme ambition and intense family pressure to succeed. Ulrike, in an effort to fill the hole in her life made by her brother's death, reads his autobiographical manuscript, The Story of My Soul, and journeys to the center of his obsessive desire for immortality. McAuliffe completely enters the mindset of an artist/suicide in prose so tight it feels coiled. Reading the novel is like experiencing a dream, seemingly rooted in the reality of its characters, but unsettling in its insistence on picking at the scabs or our anxieties